Mahabalipuram also know as Mamallapuram. It shows the Pride of Pallava Kings to the entire World. It is famous for Stone craving Sculptures and Shore Temples. Mahabalipuram is UNESCO world heritage site. For those who are interested in history & Archeology research would love this place and enjoy. I have been to this place couple of times, one in March and another in April end.

Mahabalipuram is close to Chennai around 40 KM. It can be reached from Chennai with in 1.5 hrs. East Coast Road drive will be fantastic to reach Mahabalipuram as you can enjoy the drive with sea-shore on the other side.

You will get frequent Bus services from Chennai to Mahabalipuram. You can also rent a car if you would wanted to cover some of the attractions in ECR.

ECR to Mahabalipuram drive – on the way attractions

You can visit Mahabalipuram throughout the year, but i wouldn’t recommend it during the Month of April/May as  its peak summer in Tamilnadu and you will be fried :). I visited Mahabalipuram in March and April 🙁 , it was very hot and dry .

It’s a good place to spend your weekend if you are in Chennai as it would cover the ECR attractions plus Mahabalipuram Siteseeing. on the way ECR Resorts are available and there are affordable hotels available in Mahabalipuram. But if your home town is chennai or you got a stay in Chennai, i would think , there is no need to avail the stay in Mahabalipuram, as the travel itself would be 1.5 hrs only from Chennai .

History references: The detailed references of all the sculptures are available at various websites. I just highlighted a snippet on these sculpture which i noticed and liked.

People call it  Tiger Cave. It looks like a tiger but it could have been depicted from Mythological animal called “YAALI”. The splendid work of this sculpture will really make you think how it could have been crafted by Pallava King in 8th century.

Arjunan Penance or Descent of Ganga

This Sculpture has two stories connected to it , one from ‘Mahabharatha’ and another from ‘Ramayana’

The story of Mahabharata, where Arjuna performs penance to get the weapon from Lord Shiva

The story of Ramayana, Where Sage Bhagiratha (Ancestor of Lord Rama) performs penance for bringing river Ganga to earth from Heaven

You can see Arjuna or Bagiratha , a person standing in one leg 🙂 . There are numerous interesting stories connected to the entire sculpture that you see. Let me share some of the information which i grabbed.

There are Dwarfs , followers of Lord Shiva, they signify Five Elements of Nature. Sun, Moon, Gandharvas-Musicians and Husband of Apsaras , Kinnaras-Head of Men and Bodies of Birds/Horses, other Dwarfs signify lord Ganesha , Birds, Monkeys, Deers, Lion , all are depicted surrounding Lord shiva and the other side of sculpture as well.

Here you could notice  headless hermits , which has also two interesting stories connected to it . One is related for Sage Agasthya and another one related to Pallava king itself. There are Snakes in the Middle you can see , looks like they are also doing the meditation to grab something 🙂

The elephant in the right side will grab the attention of any viewer at first look. Notice the Calves between the leg and finest details added to it . Extra-ordinary craftsmanship on the baby elephants playful and funny attitude that we cannot even think in our present era.

Final Note: It is one of finest and greatest sculpture art from Pallavas. On the first look at this sculpture, I was completely floored with the finest details which is added to it especially the elephant and its cub .  I like the quick witty humour added to this sculpture , you can see a Cat mimics Arjuna 🙂 near the elephant .

A few incidents in life of Lord Krishna being portrayed in a beautiful way .  Krishna lifting govardhana hill , Cow licking its calf  and Villagers being excellently crafted with details . My favourite was the Cow Sculpture in 3D effect.

The cow sculpture was an extra ordinary thinking and craftsmanship of pallavas where you can notice a leg comes out of the wall and creates a 3D effect. The thought process in 8th century was something WOW!!! as we still see how it could have been done.

This sculpture explains the story of Lord Vishnu is in Boar Avatar  rescuing his wife Bhumadevi from the king who abducted her .

Lord Gajalakshmi is the significance of Wealth and its been beautifully portrayed as this is  similar to Goddess Lakshmi Picture we have in our Pooja.

This place is an interesting attraction of Mahabalipuram. Lot of surprises, History, Mythological stories . It’s a giant boulder made of granite. Its been there for more than 1200 Years.  It  has not moved an inch nor being moved from it original position  on the slope and still the physics behind its giant ball is surprising for scientist.

The Mythological story about this rock is when lord Krishna eating butter, one of them  fell in this place  🙂 Interesting !!!!!!!!.. I liked the story connected to it 🙂

This is an another interesting sculpture where we could see the ten avatars of Lord Vishnu being crafted in a one feet wall .

Pancha Pandava Rathas also referred as Pandava Rathas are the most excellent architectural  monolithic temples of Mahabalipuram . The five structures  in the shape of rathas or chariots out of monolith of granite  that dates back to the 7th century.

The five rathas are named as ‘Dharmaraja Ratha’, ‘Bhima Ratha’, ‘Arjuna Ratha’, ‘Nakula Sahadeva Ratha’, and ‘Draupadi Ratha’ after the five Pandava brothers and their common spouse Draupadi from the great epic ‘Mahabharata’. There is also a history stating that these Rathas has no connection with Pandavas. Interesting !!!!!!!!!!!!!!!!

The adjacent ratha next to Droupathi is Arjuna ratha dedicated to Lord Shiva . There is also Bull statue adjacent to this Ratha you can notice.

The  next ratha is Bhima Ratha  dedicated to Lord Vishnu and it is big & huge , but there are some unfinished structures inside.

This ratha is Nakula-Sahadeva Ratha dedicated to Lord Indra and his vehicle elephant stands next to this ratha . 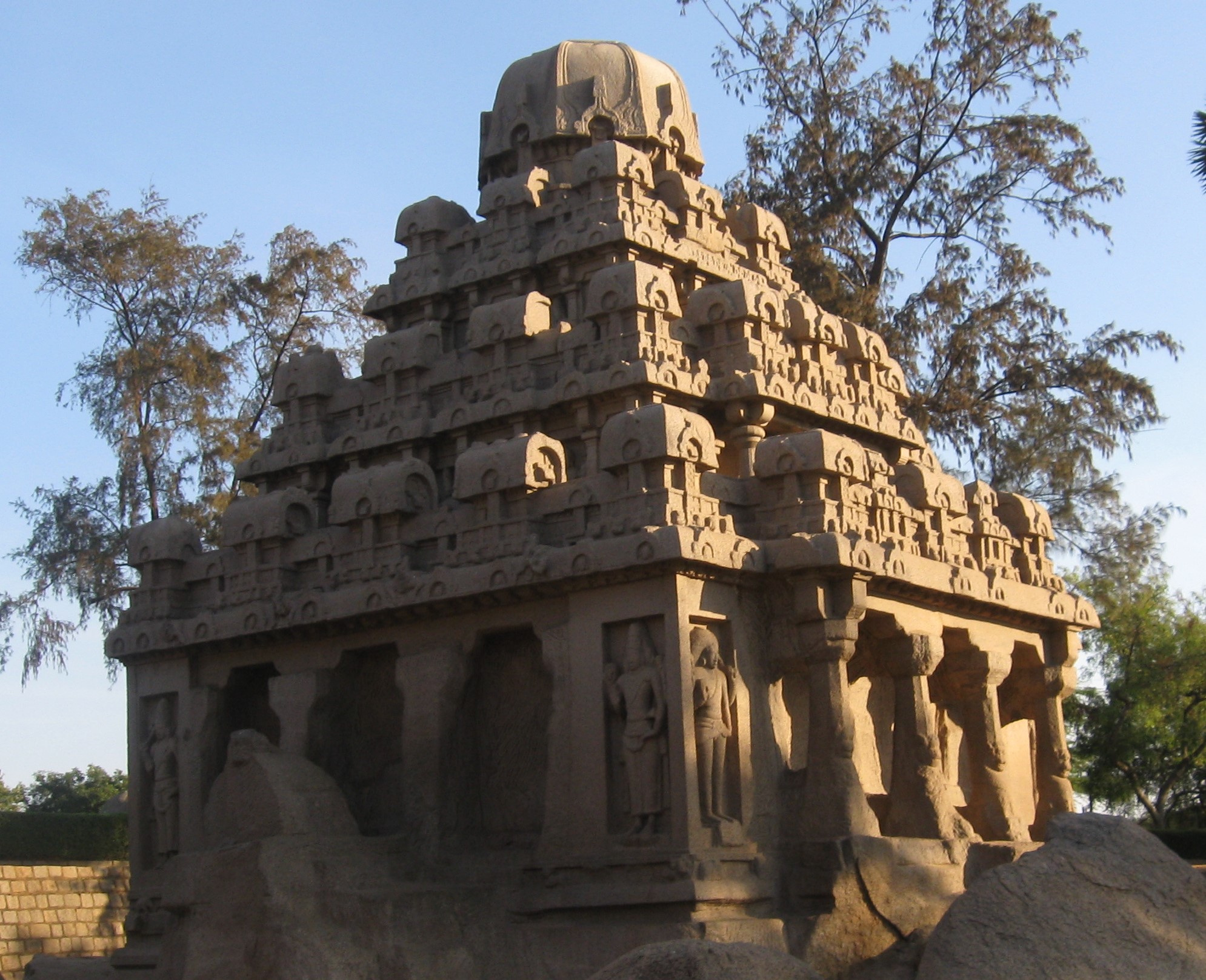 The most superior among the five rathas is Dharmaraja Ratha dedicated to Lord Shiva.

The Short Temple was built-in 8th Century and it was one of the oldest stone temples of South India. The temple was built-in a such way that the Sun rays while rising , falls on Lord Shiva in the Temple.  The shore temple looks like a Chariott .

It has three shrines and the prominent ones are dedicated to Lord Shiva and Lord Vishnu.

This is the Main Shivalingam as you could see it is damaged .

In the Background , The family of Lord Shiva sculpture been crafted on the wall

Another Shrine in the Temple , you can see Lord Vishnu being in a reclining pose on Sheshnag.

The hollow cut in the chest could have been used as small Shrine.

The Temple is surrounded by hundreds of Nandi(Bull) and all of them are similar in size. Its a Wonder by the way !!!!!!!!!

Final Note: I would recommend the travellers to Visit Shore temple mostly after 4 PM as you may not feel the heat . The biggest villain for the shore temple is with in “the shore” itself as we could clearly understand the fact that Salt on the air is causing the erosion.

4 thoughts on “Mahabalipuram – A Place for Sculpture Lovers!!!!!”